Pair of bi-amped speakers for $225

To many ads? Support ODJT and see no ads!
You are using an out of date browser. It may not display this or other websites correctly.
You should upgrade or use an alternative browser.

I fully realize these are likely garbage but thought I'd share just the same for discussion. In my own venue I've switched from QSC K10 with 15" subs over to Alto TS312 and really like the new setup better, even though the new cost me $500 versus $2500 for the old setup. I know there are plenty of gear snobs around but I think in audio gear we're seeing some actual good gear and unheard of pricing. Not sure if these dudes are in that category or not but I could see trying them out on ceremonies. Your thoughts? 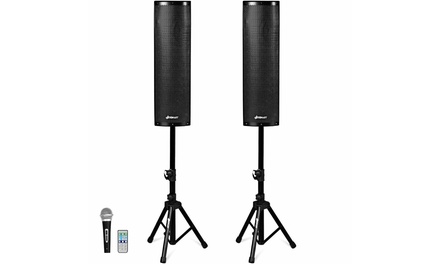 Ricky B, care to chime in?

They have a company that is called Pyle and they put on the box Pyle Pro or Pro Pyle. They have been around since I first became a DJ. Instead of calling it Pyle Pro they should call it Pyle of junk.
Reactions: sonic-vision and dunlopj

I'm using my phone and let me say this. You've been doing this a long time and you should know better.
Reactions: sonic-vision

I have met the head of Pyle. He knows what he can sell but has no apparent care for quality products. I was not impressed. If it uses electricity, they have a SKU for it. Their name may be on the product but I doubt a single engineer works for the company.
Reactions: MIXMASTERMACHOM, ittigger and sonic-vision

I'm not a gear snob I believe if it works great. Hell I have Behringer mixers hanging around LOL.

I've heard these or very similar in style at an electronics store recently and with a quick look here is what I know...

Remember back in the late 90's early 2K you could buy real fancy computer speakers that sounded good at a short throw? These are them except much bigger. 6 feet away they sound good much more than that you hear a really strange distortion it almost sounded like a voice coil loose but not quite...Kind of hard to describe. Happened with the both sets they had setup in the store

They are no where near 2000 watts. According to the specs they are 200 RMS with a 2000 peak and I have a hard time believing that simply because they only produce 92 decibels max SPL (their specs not mine) In comparison this one is 98 Db and doesn't need a stand hell you could hang it in a tree

They are kind of heavy for the return you get and rather awkward. They say 52 Lbs I assume that's both so 26 Lbs with no handles

The key to success is continually improving your weaknesses until they become your strengths
Reactions: MIXMASTERMACHOM, dunlopj and ittigger

All of that for that price? Come on you know better. Who made them? 2 rules I like to follow is buy name brand gear. A company that has a reputation to protect. Also companies make things to make a profit. What kind of profit do you think this company made selling that setup for that price. The price alone let's me know they can't be using quality parts that will sound good and last a long time.
You must log in or register to reply here.
Share:
Facebook Twitter Reddit WhatsApp Email Share Link
Top Bottom